An abnormal mass of tissue that forms when cells grow and divide more than they should or do not die when they should. Tumors may be benign (not cancer) or malignant (cancer). Benign tumors may grow large but do not spread into, or invade, nearby tissues or other parts of the body. Malignant tumors can spread into, or invade, nearby tissues. They can also spread to other parts of the body through the blood and lymph systems. Also called neoplasm.
Tumors can vary in size from a tiny nodule to a large mass, depending on the type, and they can appear almost anywhere on the body. 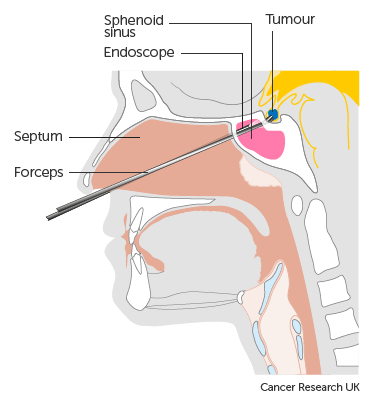 Removing a pituitary tumour via the nose

The pituitary is a small gland that lies in a hollow space above the back of your nose. It may be possible for your surgeon to remove a pituitary gland tumour via the nose. This is called transsphenoidal surgery. Your surgeon usually makes a small cut on the thin wall of bone and cartilage that separates the nostrils (the nasal septum). They put tools through this hole and up to the pituitary gland to remove the tumour. Your surgeon may also use an endoscope. An endoscope is a long tube that has a camera and an eyepiece. They use the endoscope to operate surgical instruments and remove the tumour.

Surgery to give chemotherapy

Side effects of brain surgery